Baiting a Trap with Crawfish Bread

I have done my share of traveling and plan to do much more, but the thought of living anywhere but here is anathema to me. When I was exiled after Katrina, a friend suggested that none of us knew where we would be living in two years I knew exactly where I would be: In my purple cottage in Uptown New Orleans surrounded by like-minded, relatively impractical people who are food and music obsessed and who, for the most part, drink too much, talk too loud, and always seem to have extra to share.

In 1984, my sister, Beth, moved to Chicago so her then-husband could accept a job as an analytical chemist and she could start her own veterinary practice. I was 16 at the time. Young, petulant, and self-absorbed, I didn’t think too much of her going. I missed her, but Chicago seemed pretty cool.

Having grown up in New Orleans, I just kind of assumed everyone, everywhere enjoyed crawfish boils, annual parades, abundant festivals, dressing as an alien from Outter Space - or whatever - whenever the urge struck, and wild men in feathered suits chanting, “Hey Pocky Way, let’s go get ’em.” Compared to my studious older sister, who paid little attention to anything beyond school, I was a street rat. I chased Mardi Gras Indians, sucked up local and punker music (and nasty Dixie longnecks) by sneaking into Tipitina’s, The Rose Tatoo, Jimmy’s, and Jed’s whenever I could and saved my pennies for music festivals 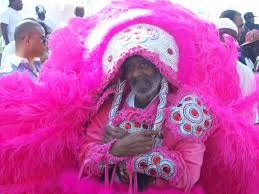 and concert T-shirts and  little else.

As the years have passed, like me, Beth has become all too aware that Louisiana is very different than anywhere else. Her longing to return to the place of her birth seems to intensify each time she comes for a visit. I do what I can to feed this desire and really tighten the screws. I send her local real estate tabloids, ship her big care packages of Louisiana products, and cook all of her favorite dishes whenever she comes home. I babble endlessly about music festivals, Louisiana seafood, and relatively comfortable winter temperatures (glossing over August and hurricane season).

She arrived Monday night for a 10 day stay. Why she is not staying through Mardi Gras is beyond me, something about "work." Knowing she would be customarily tired, cranky and ravenous I insisted that she drag ass over for a mishmash of assorted gumbos I had knocking around in my freezer. I dazzled Beth and her husband, Chuck, with the leftover dredges from pots of my Gumbo Z'herbes, and Chicken and Sausage gumbo, and a quart of Smoked Duck and Andouille gumbo I grabbed from Prejean's when I was out that way a couple of weeks ago with Susan and David gathering content for the magazine. I tossed out some bowls and a loaf of French bread and watched them lap it up as though they had been exiled to a Siberian prison for a year. That done, I yanked some homemade Crawfish Bread out of the oven. It's pretty much a dead ringer for the stuff Panaroma Foods (in Marksville) sells at Jazz Fest. In figuring out how to make it, I feel as though I have cracked the nuclear code. Anyway,  poor Beth nearly had a heart attack. I mean it, the woman just freaked out. She thinks I am some sort of a damned genius because I can now make That Thing She Craves Most.

The evil part of me just never gets enough of witnessing other people's longings for the way we live. Even better, tapping into this longing is relatively effortless for me: In this case I just opened the freezer.

I am a native Missourian but have visited NOLA yearly since my first visit in 2001. I can't seem to get enough of the food, music, and people from New Orleans. I'm dying to move, even though it means leaving my very loved family in Missouri but one day the grandkids will me grown and have lives of their own so maybe then. Jerry, my hubby, says I'll regret moving away from family but I remind him that we will always come back to visit....it will be like now, only reversed! Plus they will have a place to come to and not have to pay for a room plus have an awesome tour guide!
Your story explained exactly how I feel and I'm not even an NOLA native! Thanks for sharing.

Hello, thanks so much for sharing this with me. I have a couple of stories for you.

I met my now ex husband  because his parents retired from Michigan to live in the French Quarter when all of their children were either in college or had already graduated. My then husband-to-be moved to New Orleans a year or so after his parents, and his brother and sister followed soon thereafter. There was simply no escape for my  former in laws and it was not so long before they were stuck with me too, albeit temporarily.

In another case, I met two total strangers at Frankie and Johnny's restaurant over seafood platters a couple of  years ago. They are now my friends but at the time,  they were a couple of soon-to-be retired academicians who were planning to move to New Orleans with the same concerns as yours, which they shared with me. Two years later one of them is happily fulfilling a lifelong dream of playing his guitar in music clubs while wailing folk songs at the top of his voice. His wife has delved into the life of an artist she always denied herself when she was a university professor. Their children and grandchildren visit often and are able to share in the new lives their loved ones have created in their new, very welcoming and open community. They are able to see these people as they never did before and witness the blossoming of their creative selves. There is a vitality that has come to them in their new environment, whereas there is a pretty good chance they would be just doing  the same old thing back in their old communities.

If you have the resources to move here, then take the chance and do it. At this time there are more opportunities for entrepreneurs in New Orleans than any other place in the country. This is a true statistic. See IdeaVillage.com. If you come and it is not the right place for you then you can head back, shrug your shoulders and commence with whatever it is you were doing when you left. If you do not do it you will spend  the rest of your life wondering.

Keep in touch and let me know how things evolve for you. I would be happy to help you get connected. This is a very easy place to sink into.