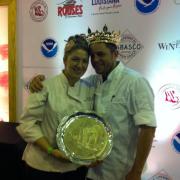 I first met Nealy and Keith Frentz in 2009 when they were recognized by a culinary magazine as rising star young chefs and I have watched them grow personally and professionally ever since. Like many young, modern, talented  chefs they are looking to take their careers to the next level, a desire that was really put on steroids for Nealy when she recently recorded a segment for a soon-to-be nationally televised cooking show. "I just felt myself come alive in front of the camera," Nealy told me. "It felt so right; I just knew that's where I've always wanted to be."  This is a desire I simply cannot relate to; I feel as though a vampire has stolen my soul every time someone so much as takes my picture — but that's a story for another day.

This was their third year in the competition and this time they hit their mark. As co-owners and co-chefs of Lola in Covington, they worked as a team to wow a panel of judges that included chefs, restaurateurs, and culinary-magazine editors with a dish they regularly serve as a Friday lunch special at Lola. The use of wild-caught Des Allemands catfish, a Louisiana favorite that has begun resurging recently after roughly two decades of scarcity on the market due to the prevalence of farm-raised fish and its simple preparation, caught the judges" attention. They served the cornmeal-dusted catfish with a Camellia red bean and local crawfish succotash, braised collards and house-made tartar sauce.

The Frentz's were obviously moved by their win. Keith's face glowed and Nealy literally wept with joy when as she watched her husband take a knee to receive the crown  from Chef Cory Bahr, the outgoing King. It was a touching moment to witness.

The competition involved 10 chefs from across Louisiana. The Frenz's will spend the next year representing the Louisiana seafood industry nationwide and internationally and they will compete as the state's representatives in the Seafood Promotion and Marketing Board 's ninth annual Great American Seafood Cook-Off, set for Aug. 11 at the New Orleans Convention Center during the Louisiana Restaurant Association's Foodservice Expo.

Check out Nealy and Keith's handiwork at Lola, their brick and mortar restaurant, or catch them tooling around the Northshore of Lake Ponchartrain in their food truck, Lola Deux, but catch them quick; this husband and wife duo is destined for greatness.

I remember that! They were featured as Chefs to Watch in 2009. Such a great push for them! I wish them the best with their future endeavors!