A Conversation with Leah Chase 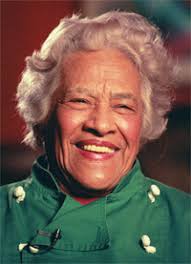 Last month Jyl and I were invited to hear author Jessica Harris interview the legendary Queen of Creole Cuisine, Leah Chase, at the Ogden Museum of Southern Art in New Orleans. Born January 6, 1923 in Madisonville, Louisiana, she moved in with relatives in New Orleans when she was a young teenager to go to school. "My father was more Catholic than the Pope," said Mrs. Chase "and he insisted that his children be educated. Back in those days, schools were segregated and my only option was to move." She rode into New Orleans on Monday mornings with a neighbor who worked in the city, and back home most Friday afternoons to spend weekends with her family.

To earn money, she took a job as a waitress and then as a cook in a fine restaurant, and fell in love with fine dining. She told of walking to work through the French quarter in the afternoons, marveling at all the women with the luxury of being able to sleep until late afternoon then lounge around on their front porches in expensive negligees. "I was quite naive," she said.

A few years later she also fell in love with Dooky Chasase II, a musician. "Don't ever fall in love with a musician," she advised, laughing, as she talked about their 60+ year relationship. Chase's family owned Dooky Chase Restaurant, a small sandwich shop, and Mrs. Chase began working there shortly after they married. She dressed the tables in crisp white cloths and added a few Creole classics to the menu. The restaurant soon became famous for its fine food and upscale atmosphere. It became a regular haunt for musicians like Duke Ellington and Louis Armstrong, and people from the "other" (white) side of town started showing up as well. The upstairs meeting rooms became a neutral meeting spot for many negotiations during the civil rights movement.

Today, it is still a popular meeting place for politicians and power brokers. Of all the U.S. presidents who have eaten at her restaurant over the years, President George W. Bush is the only one who has been twice, she said. "He is a very nice man, a kind man. He got bad advice from bad advisors, but he is a nice man." Most recently, President Obama enjoyed a meal there, and Mrs. Chase said he'd be welcome back, but that he'd better not have the audacity to put hot sauce in her gumbo again. "It's fine just as it's served."

Mrs. Chase also reported that the Jackson Five ate there on a regular basis when they were performing in this part of the country, and that she sent sweet potato pies to Michael Jackson several times a year up until his death. She ponders whether she could have altered the tragic trajectory of his life had she only sent more. "I think he did not feel loved enough," she said. "I think he was sad."

One of the better-known traditions of the restaurant is the ladling out of gallons upon gallons of Gumbo Z'herbes on Holy Thursday. Traditional gumbo z'herbes is a meatless dish developed to serve during Lent for those abstaining during the 40-day period of penitence. Mrs. Chase's version is loaded with meat and as many different types of greens as are available "because people need to eat on Holy Thursday; it's the last meal they'll get until after sunset on Good Friday and they need real food," she said.

If you go, gentlemen, take your hat off when you sit down to the table. My husband made the mistake of leaving his on, and Mrs. Chase invited him to remove it. "Would your mother let you sit down at her table with a hat on?" she asked. "No ma'am," he replied, and put his hat on the floor.